One of the things I like the most about the internet is the chance to share content to the world and, of course, getting to know other people’s content across the world. Social networks have made it lately much harder, making the internet a place more locally focused and more commercializable.

Past and present of people sharing random thoughts with strangers

I’m not against trade or ads to an extent but the Internet, and especially the old web was about knowing other people’s points of view: Reading an obscure Geocities website or talking to a Mexican girl over IRC. You know what I’m talking about. It was a window to the world, not an echo chamber. Another difference is that in the nineties and in the early 2000s making a personal website was much more simple and you needed to know some HTML but not too much and it was fine. You could even have a gopher hole and just upload txt files in an organized way. Now you can have a blog and websites are nicer but they are mostly paid sites or just freaking ugly and bloated like Blogspot (yeah someone had to say it, blogger is fucking ugly). Maybe you think a blogger blog is ugly but then you try a self-hosted blog: You need to install it and to make it look less ugly you either pay or choose a premade theme, you need to rent a shared hosting and you have to buy a domain. Also, you need to think about SEO and stuff otherwise no one is gonna read you. It turns out that there was a time when blogs were kind of popular but that time is long gone. There are still good blogs around but usually they work for ads and for a community that comments their publications. Not random people anymore.

I have to be honest: I didn’t know much about older authoring methods like news or gopher. I just knew they existed until a year ago. I knew gopher was a thing but I didn’t know what it was for. Partly because browsers don’t connect to these sites anymore so gopher is now somehow part of the deep internet.

So if you don’t know what it is Gopher is a protocol to share and publish text files pretty much like the web but without hypertext. You can organize the text in folders which can be clicked or visited but that’s about it. When I got to SDF I realized not only that it was a thing but also that people still use it. Many people use Gopher to share their thoughts in text journals without having to think too much about it. Those sites that are purely managed as journals are usually called “phlogs”

Where are those Gopher sites (or holes)?

Mostly they can be found through Floodgap’s proxy which seems to be the hub for everything. Now if you look at what’s published in it you’ll notice that most if not all of the gopher holes are in North America or Europe now. Asia, Africa or Latin America barely have anything published at least with local domains. However, people from all over the world still publish stuff in gopher thanks to SDF. By the way, almost every Gopher hole I’ve seen alive is in English but there are a few in other European languages like German or Polish. Apart from SDF I don’t know if you can request a gopher space anywhere anymore.

Well, actually this article was supposed to be about Gemini… right? So Gopher is pretty old, actually older than the World Wide Web so Tim Berners-Lee could see Gopher develop before he came up with the Web:

Mr. McCahill [the man who designed the Gopher protocol] remembers a potentially pivotal moment during that frenetic time: At a meeting of the Internet Engineering Task Force in San Diego in 1992, a computer scientist named Tim Berners-Lee approached him on the meeting’s final day. “You know, I think we are trying to solve the same problems here,” said the Englishman, who was working on an internet tool of his own, one that hadn’t yet gained traction. He proposed a collaboration with Mr. McCahill and his team, maybe even merging their two projects. Mr. McCahill said he’d consider it.

When he got back to Minneapolis, he read the documents but couldn’t follow the ideas or see how Gopher would align with Mr. Berners-Lee’s project. Mr. McCahill sent a note to the man — who would, of course, become famous as the inventor of the World Wide Web — wishing him well.

“I look back on that now,” Mr. McCahill says, “and I think, You know, that was probably a mistake.”

We know what happened afterwards.

Then what’s Gemini? In my view it’s a middle ground between the Web and Gopher (and much newer of course). It’s a non commercial reaction to the web following the development of BOTH protocols:

You can read it in more detail Gemini’s specifications.

Then I ended up in https://flounder.online and loved the idea. Flounder allowed me to read and create a Gemini site that could also be looked at from a web browser and it looked nice. Now the true way to look at a Gemini site is through a Gemini broswer. I found two ways I could actually try and which I recommend: 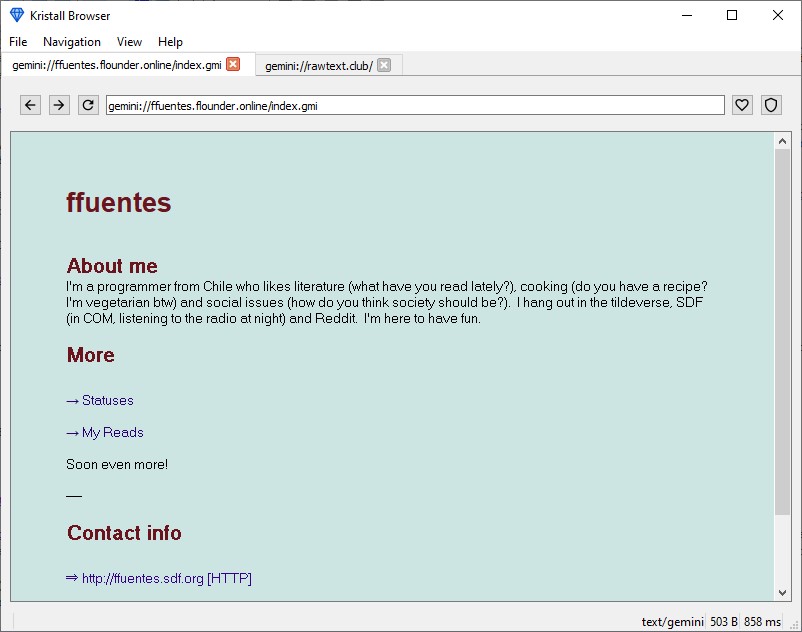 It looks this way, pretty web-like (although the protocol doesn’t allow for picture attachments). As you can see, it has some style but colors and stuff like that are set by the user who sees the content. I can choose to see it like a text file if I want to. I can also choose to see all titles white and the background white and let any font I wish to read the text. It also lets you browse gopher holes. You can get Kristall here. It works in Linux as well. It’s written in C++ with QT5 (some people didn’t seem to like that). 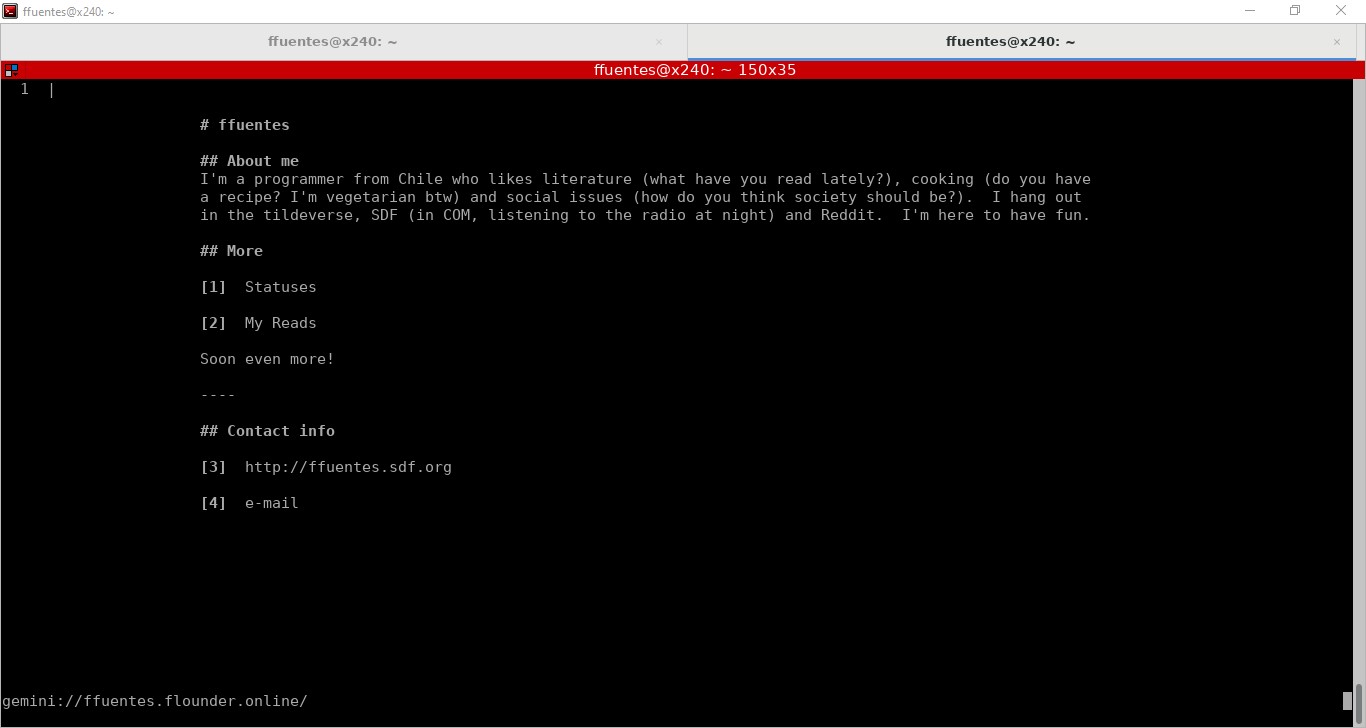 Amfora is a slightly different experience. Of course, if you don’t have a graphical environment you won’t care about “fonts” but other than that you get the site as it is. Also you type numbers instead of clicking links much in the gopher/cli fashion. I couldn’t find any sort of gemini-to-gopher proxy yet but I think there is at least one being developed. Amfora doesn’t support Gopher but it does support proxying gopher through some other site (which as I said I haven’t found yet).

Differences between Gopher and Gemini

If you ever browsed the gopherspace from the command-line you’ve noticed that it’s pretty fast. Gemini is not as fast. It’s not slow as the WWW but TLS and the fact that there’s some client side rendering makes it slower. However, it’s a trade off for all the features it includes.

Visit a gemsite like gemini://astrobotany.mozz.us/app/. Just try it (with a browser like Kristall). You can’t really do any kind of dynamic application using Gopher, let alone a game. There’s just no way. I don’t know if a store could ever be built using Gemini but I’ll give it a thought to all the potential and current application it’s got but it’s interesting.

So far I’ve liked Gemini and I’m trying to keep my gemlog going about my book reads in the gemlog at Flounder. However, I don’t like having my gemlog at a place where I can’t access the filesystem like I used to with websites. I’d like to move it to a “cooler” server or when I rent a VPS again.

Now, does it have a future? If you look at it commercially I don’t know but unlike Gopher which was an experimental protocol, Gemini is a reactionary protocol to the web, in and of itself (in the best possible meaning of the word “reactionary”).

Pretty cool idea which I knew nothing about a week ago. Pretty nerd too!

Do you want your own gemsite/gemlog too?

There are a few places offering gemsite hosting which I’m aware of at the time I’m writing this article:

By the way, if you don’t wanna download anything yet just use Mozz’s HTTP->Gemini proxy

« Do you still use stamps and meet penpals? Plan 9 Bootcamp Stuff »