It’s my first time participating in the SDF’s Plan 9 Bootcamp. I wouldn’t have taken any action or would have cared in the slightlest if it wasn’t for a old friend of mine who loved it a while ago when I was too tired of distro hoping (I even remember trying Kolibri and Haiku for fun at some point) but I never got to see Plan 9. The following is a post with tips from an newbie’s perspective so don’t expect me to be an expert in the system.

So if you’re wondering what’s this about it’s an event where SDF members or new users can request a small VPS to try Plan 9 with others from the very beginning. Plan 9 is a very particular operating system which is more graphically focused than unix is.

The directions to put Plan 9 up and running in the VPS are already in SDF’s tutorials but I’d strongly suggest to also check the wiki’s tutorial on Plan 9 right afterwards.

Check this quick demo on Plan 9:

Requirements to get everything right

I wanted to show you this video because it demonstrates that the first thing you’ll see if you did everything right is a grey screen. That’s not an error.

So the first requirement is to follow the tutorials. Also, to get there you’d need a “client” called drawterm. However, it’s very important that you get swtch’s version and not 9front’s to avoid any issues since this is not the 9front version of Plan 9 and you might experience some crashes. You can find the right drawterm here This has been mentioned already by smj in the mailing list.

By the way, on Windows you need to start this drawterm from the terminal with parameters:

Then the system will prompt you straight to the password, so you just type carefully the password you defined earlier (see the first tutorial linked above).

Another important requirement: Get a mouse. Get one that has the three buttons (yeah, the wheel in between) or at least if you are using a laptop make sure you can emulate the third button because this is not always possible. In theory, Shift + Right click should do it in some systems but in Lubuntu I realized I need to press Left and Right click at once. Fortunately my netbook (I gotta make a post about it too) has both buttons as such. On the other hand, my Thinkpad doesn’t have trackpad buttons (it’s a x240) so I had to get a mouse for that one but it feels almost as satisfying as the guy in the video.

HELP (How to get it)

The other big requirement is to get in the mailing list. This was the first time I added myself to a mailing list so it’s worth explaining the process. I wasn’t the first one who struggled with it:

You have to send an e-mail to majordomo AT sdf.org with the following text body:

And then follow the process: It’ll require that you reply to a new message with a string of text given to you to confirm that you accept joining the mailing list.

There are also two other mailing lists. One was mentioned by smj in the welcome e-mail which is 9fans AT 9fans.net. There’s an issue with it because if you try to join 9fans using the e-mail 9fans-request@9fans.net the e-mail address doesn’t exist but you can join it if you use their mailing list’s website but remember this is not the official mailing list of the bootcamp. Another mailing list related to Plan 9 is the one from cat-v.org with a very simple instruction which is to mail cat-v-owner AT cat-v.org with “subscribe” (no quotes) in the message body. They have an IRC channel in freenode too but I never tried to talk to them so I can’t recommend (I don’t know if they’ll take newbies questions over there).

Of course, SDF is more than mailing lists. You can also get in SDF and use the bboard (there’s a “Plan9” board). Also, if you want you can ask for help in COM. Go to plan9 or roof.

My experience so far

It’s been just a weekend so far and I think it’ll last until the end of the year. I thought I wouldn’t be able to get anything done but I managed to get everything up and running so I can vouch for all the material previously published by the folks at SDF and specially smj who’s been there to help everyone (with server issues in between). I’ve found out that information on Plan 9 is not so easy to find and you must get in mailing lists because even websites with tips are scattered all over (actually I was going to just post a series of links).

I could make the server run and stay up after the upgrade done by SDF to the VPS and today I was able to run the system and even SSH back to SDF. The funny thing is that Plan 9 is not like UNIX and it’s quite experimental, hence, it’s quite the experience indeed! As you may have seen you open terminals which morph into graphic applications and yet everything is text! (when you click on something you just run a command). Also, very important: It mixes its filesystem with yours so you can pass stuff from and to.

I’ve tried it from Ubuntu (Lubuntu) and also from Windows 10. Plan9 is stable although it feels slower than the video I showed above since it’s a remote computer (and I live in Chile so, you know, latency matters). I noticed that Windows 10 has no major issues with drawterm and it’s preferable to work with it if you wanna pass stuff from your Windows filesystem to Plan 9. However, I think Linux’s drawterm is more stable overall. 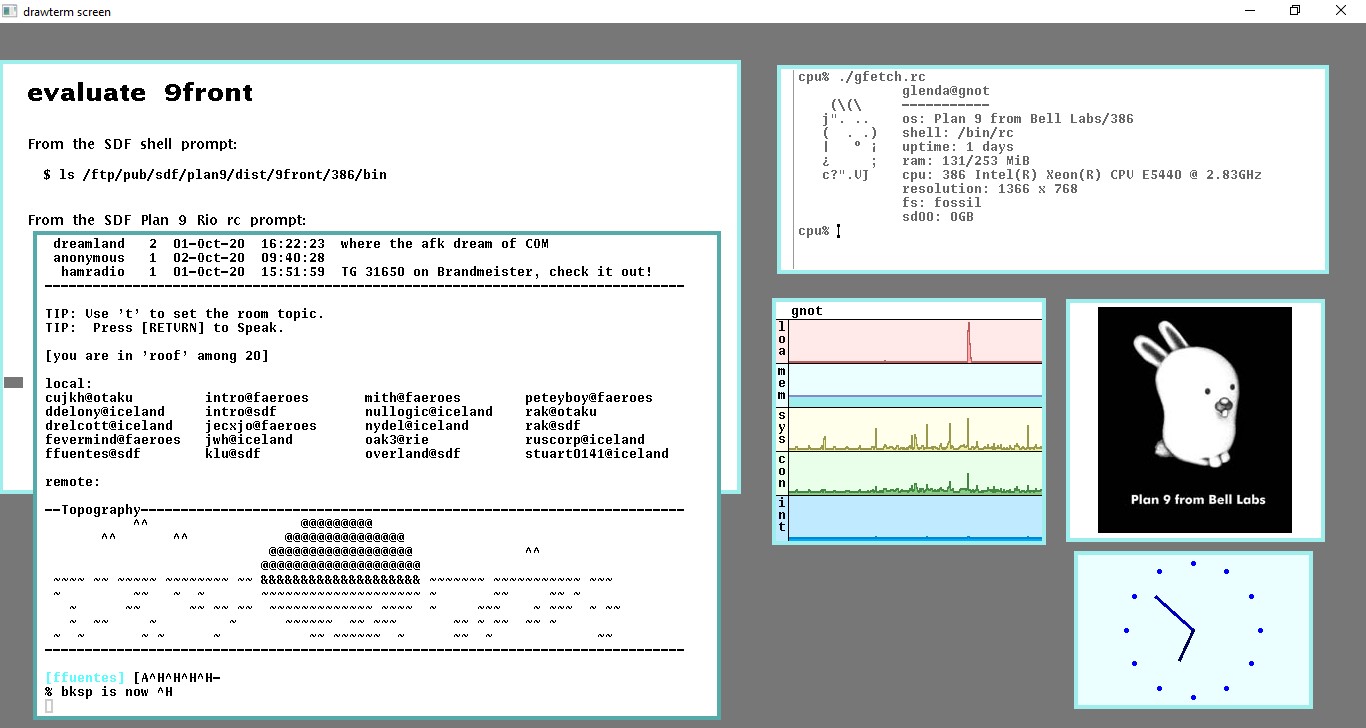 I have two goals now, perhaps humble, perhaps too low: