I wrote already about this in my texto-plano.xyz blog but i’d like to talk about it here too without making a simple translation as some months have passed since I wrote that article. This is not an installation guide and I’m sorry if you came seeking a guide but it’s my experience trying it out.

OpenBSD, of course, is an operating system based on BSD and it’s regarded as a security-focused system. However, there are two important aspects to it that are lesser known.

The first one is that it’s a portable operating system, in other words, it’s intended to work in many different architectures. The reason for this has to do at least with its origins in the NetBSD project whose main focus is portability. That’s why these days many older architectures like ppc or i386 that are getting less attention in the Linux world are more likely to use BSDs.

The second one is that it’s easy to install. Despite lacking a GUI or ncurses interface, its installation wizard is rather easy to follow. So you may not even need a guide to install it after all unless you need to do some complex partitioning or you have particular needs that are not covered within the installer like encryption.

So it’s not a bad idea to install BSD at all. 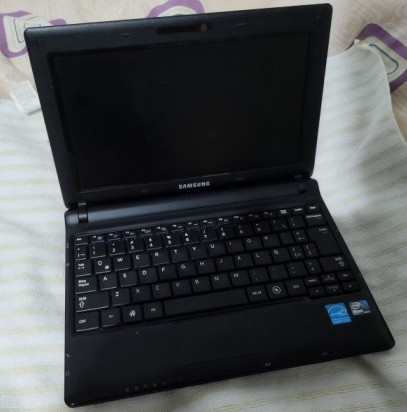 I got this Samsung NP-N100 in Chile when I was 22 or something. I was between jobs in late 2010, glorious days for netbooks. So this particular laptop was basically the cheapest thing available in the country. I believe this netbook was sold solely in developing markets like South America, Phillipines or India. It also happened to be one of the first things I bought online so it was significant for me at the time waiting for it. I just had a desktop AMD Athlon 64 x 2 that worked well beyond 2015 but finally I could move around and do some stuff online (remember phones at the time weren’t smart). Also, just 1 GB of RAM expandable (single slot) to 2 GB (which I swapped years later).

This N100 netbook is pretty slow. It was an Intel Atom N435 at 1.66 Mhz with one physical core and two virtual cores. This particular version came with a Samsung Linux thing called Meego that nobody remembers anymore. I swapped it for a Linux system very soon after getting it because it was really limited and that was the plan either way. So the point is that another reason why I like this netbook is that it never got Windows installed.

For a long time it had Ubuntu variants which had to get leaner and leaner over time due to memory concerns. Its last years before BSD it had Lubuntu which did a great job if you wanna keep using it with Linux.

The project Texto-Plano.xyz made me wonder if OpenBSD would be safer for everyone joining the server and to me as the sysadmin. I started Texto-Plano.xyz in November 2020 and I mention this because I didn’t have previous experience with BSD at all. I just thought it was a good idea. So for a while I lacked the “real hardware” experience altogether.

When we use a netbook, especially in this decade we need to be aware that it’ll not be the same as a regular computer because they tend to be rather slow. I already relied heavily on cli and ncurses software to do stuff, basically for everything but a few things like browsing the web albeit using LXDE as a desktop environment. My switch had nothing to do with Lubuntu issues. I just wanted to try something different.

CLI software I used with Lubuntu

Once I installed OpenBSD I chose to go for the full OpenBSD experience and used cwm which is way more austere and more of a window manager than a desktop environment.

At the time I didn’t chat much but I relied a lot on the SDF resources to do stuff. Also, to browse the web I still used Firefox and Sylpheed to get my mail. One of the issues with a netbook is that the web and modern browsers are too heavy for them (RAM hungry but you know this story). The same with Youtube videos. They are just too high quality to be rendered by their underpowered chipsets.

So when I installed OpenBSD I found myself with a still very different system. One of the cool things about cwm is that it’s keyboard focused. You can move, enlarge, shrink, maximize, minimize, switch between, start, close windows without ever caring about the touchpad or mouse. So I only increased my reliance on CLI applications.

CLI software I used with OpenBSD/cwm

I have to say that package management is very good in OpenBSD for desktop use although it doesn’t use any GUI but it’s very similar to APT. You don’t have to rely on ports management except in some specific situations which right now I wouldn’t be able to remember. 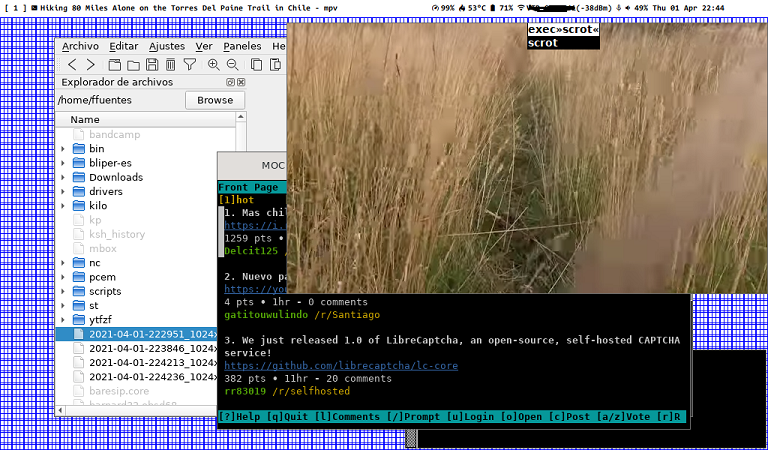 I’m aware that some people even discard wms altogether and try to work with the tty alone but so far I haven’t found any way to watch videos with ttys and also cwm barely takes up any memory.

Some issues I found

At first I struggled a lot to make USB audio work despite Multimedia FAQ instructions which are pretty easy to follow. In the meantime, I got a SSD. I never changed the HDD in all these years and I can’t help but move the netbook a lot while I’m using it but I worried it stopped working and also expected a boost in performance with the SSD. I swapped it for a SSD with about the same size ( ~ 240 GB) and the browser and GUI applications started to behave more stable but not terribly fast. Now I can open a few tabs in firefox. I try to do some stuff and then close firefox immediately.

So that’s all I have to say. It works and I’m happy with it. I’d like to work with a more contemporary machine and a “regular” desktop environment and see how well or bad the OpenBSD experience is but at least what I can tell is that the little machine is usable as is. Sometimes you don’t need too much.

I’I can’t recommend this system to a total newbie in Unix-like systems but you can pull it off if you ever dealt with ArchLinux or Debian.

« Signal, Telegram? Why not Jabber? Printing in OpenBSD »